Fleas are an annoying and dangerous pest that can make life miserable. Not only can they be difficult to get rid of, but in some cases the cures can seem almost as bad as the problem. Of course, since fleas carry a number of diseases such as typhus; pneumonic, septicemic, and bubonic plagues; spotted fever; bacteremia; endocarditis; bacillary angiomatosis; and peliosis hepatis, as well as being a carrier for the Hymenolepiasis tapeworm, getting rid of them is a priority.

Fleas are often brought into the home on a pet and they rapidly set up housekeeping. Within 10 minutes they can decide to infest other animals and people, and then it can be no time until a full epidemic is underway.

Most treatment strategies involve insecticides, which should immediately inspire you to caution, since insecticides are generally neurotoxins, which means they attack the brain and central nervous system. This can be especially problematic in households with pregnant mothers and children.

For other treatments, including some that are non-toxic, read our article on What’s Living In Your Carpet? 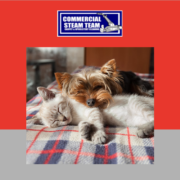 Pet Owners – How To Cut Back on Litter